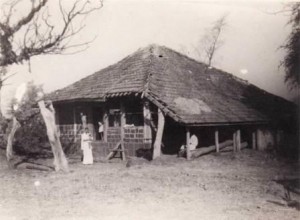 In ancient days Shree Shankar Bhagwan was performing meditation on Kailash Parvat. He found his Devotees were going through many difficulties and agonies. He was worried and decided to give relief to the Devotees.

Shree Shankar Bhagwan appeared in Kadapegaon in the form of a solid stone with peculiar shape (Pashan) at a small Gotha (a village dairy). This Gotha was owned by one Bapu Gawli, who was staying in a nearby village.

One early morning Bapugawli went to his farm to surprisingly find a stone popped up in his farm. He tried to push back the stone. But to his surprise, blood started running from stone. He was stunned and went home, worried about incidence. He went to sleep that night.

Next day early morning Shree Shankar Bhagwan came in his dream and told him that the Bhagwan himslef had come in Bapugawli’s farm to stay permanently to take care of all the Devotes. Bapugawali was very happy, He told this incident to his wife. In the morning, after taking bath they both went to farm and did proper Puja of the sacred stone They prayed to Shree Shankar Bhagwan and requested him to stay permanently to look after problems and bring happyness in the life of his and all devotees families.

Shree Bapujibuva called Shree Kalkaimata to come to same place to take care of her devotes. She agreed for same and took an Avatar of Dharini. When she was coming in speed to Kadape she was about to go beyond Kadape, but Shree Bapujibuva stopped her and made her to remain where she was. This is the reason why Shree Kalikaimata face is facing towards North West i.e. Vayava.

Amongst the Devotees, Shree Kalikaimata is popularly known as Shree Kadapkarin, as she is permanently residing in Kadapegaon. Devotees belief is that Shree Kalikaimata takes care of their pains, problems, and any eventuality in their life and keeps them and their family always happy.

The Trust and the Mandir runs on the Donations and Contributions from Well-wishers like you. You can now Donate Online. [More..]