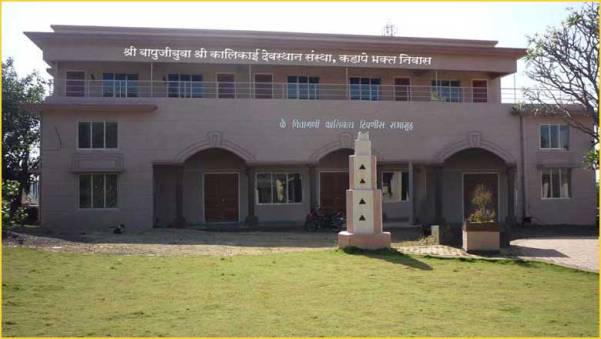 Being away from main cities and towns, accommodation was a problem in early days. To overcome the difficulties faced by the Devotees, the Managing Committee took a decision to build Bhakta Niwas right at the Mandir Premises.

In the year 2009, New Bhakta Nivas was inaugurated.

It has a Large Hall (Sabhagruh) at Ground Floor, which is used for Various Functions, Annual Rituals, Religious, Social and Cultural Programs.

First Floor is having big Rooms for Devotes to stay.

Gents and Ladies Toilets and Bathrooms with amenities are separately build.

A Quick Tour of The Bhakta Niwas …

Information about The Bhakta Niwas at Kadape Devasthan is given by Shri Deepak Ranadive, the Secretary of the Trust.

Information about The Canteen facilities and Food arrangements Kadape Devasthan is given by Govind Dabade, The Trustee.

The Trust and the Mandir runs on the Donations and Contributions from Well-wishers like you. You can now Donate Online. [More..]